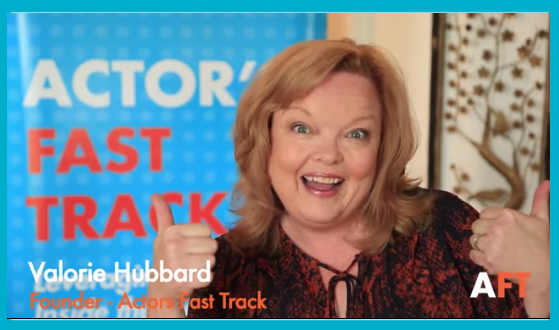 Actor’s Fast Track gets you out of your self doubt straight jacket .

Actor’s Fast Track is the brain child of working actor Valorie Hubbard. Her mission is to change the world one actor at a time by getting them the career of their dreams WAY FASTER.

Valorie started acting at the age of 3 when she dramatically threw herself down a staircase. When her mother discovered she was still alive she enrolled her in creative dramatics class and she has been acting ever since. She attended The Goodman School of Drama and migrated to New York where she spent the 20 years. Some of her favorite NYC credits include The Crucible at The Roundabout Theatre, The Country Boy at Irish Rep, The Sweepers at Urban Stages and The Queen Bee’s Last Stand also at Urban Stages.

Valorie also worked the regional stages like NJ Shakespeare Festival, Delaware Theatre Co., The Wilma Theatre, Weston Playhouse, Missouri Rep and The Lab Theatre in Poland. Valorie was asked to be a member of the last international company to work at the Lab Theatre. She has also collaborated with an amazing range of acting professionals including John Guare, Joseph Chaiken, Toni Kotite, Neel Keller, Terry Schreiber and Zbigniew Cynkutis.

A decade ago Valorie made her way to Los Angeles and has since built an impressive resume with roles on Castle, Agents of S.H.I.E.L.D, How I Met Your Mother, Glee, American Horror Story, Workaholics, True Blood, 90210, ER, Desperate Housewives, The Middle, Good Luck Charlie, recurring roles on Kickin It, and General Hospital just to name a few. Her IMDB has all her credits if you want to check it out.

Actor’s Fast Track is currently what Valorie is most passionate about, but prior to starting such a successful business for actors, she partnered with Lea Tolub-Brandenberg to help actors through another company Strategies. The two co-wrote “The Actor’s Workbook” (available on Amazon.com), published by Allyn & Bacon Publishers. Now on her own with Actor’s Fast Track, she consults with working actors on their career paths. And has recently published “Rule Breakers: Changing the Way Actors Do Business” and is giving our listeners a special code to get a copy for FREE! Check the resources below.

How to Become a Working Actor

Rule Breakers: Changing the Way Actors Do Business. Get this book for FREE by texting RULEBREAKERS to 38470