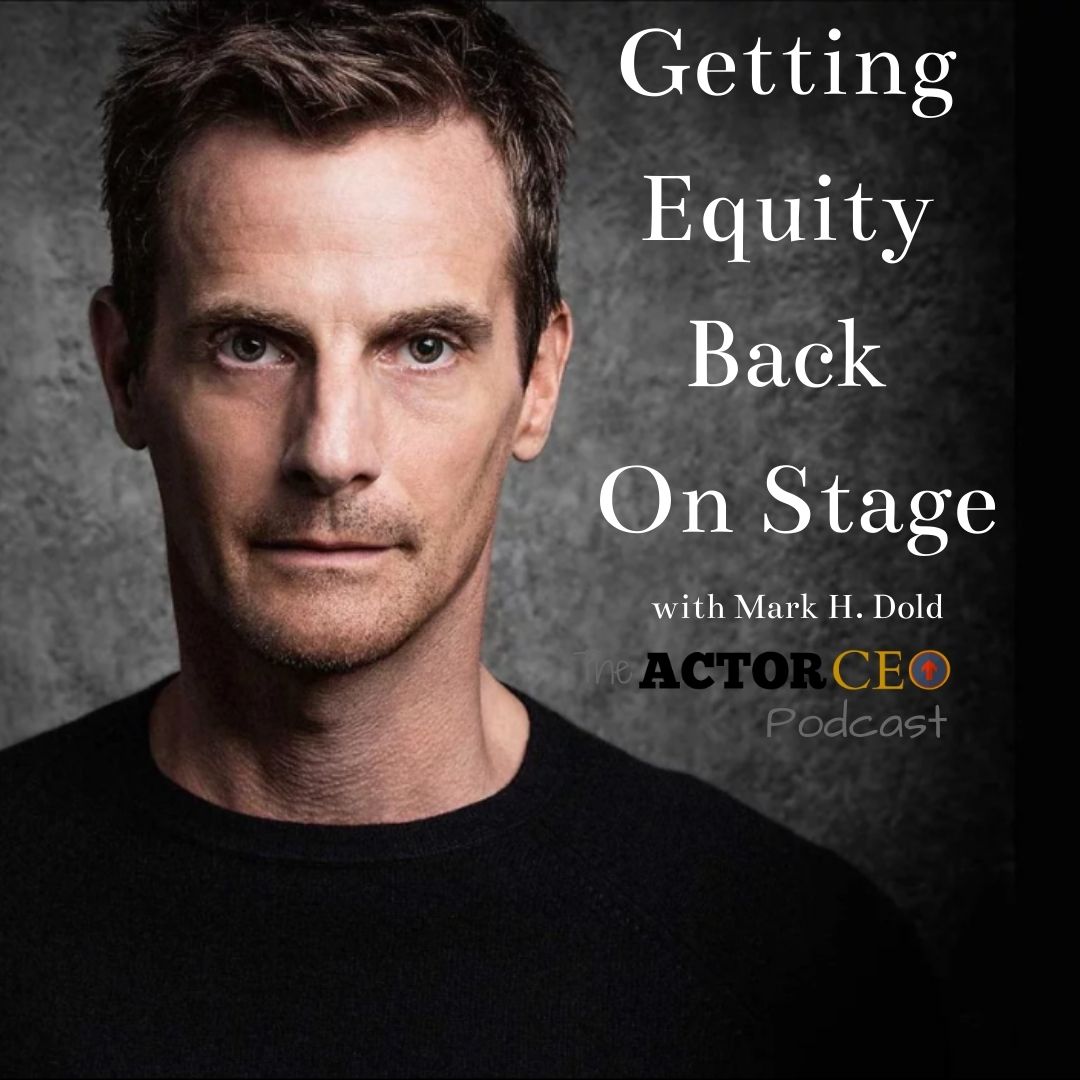 Harry Clarke at Barrington Stage Company starring Mark H. Dold was slated to be the first Equity approved indoor show for a live audience after live theater shutdown due to the Coronavirus pandemic.

While some of the details have changed since this interview, the facts in this conversation are important, educational, and inspirational for moving theater forward and so nothing has been altered from the original discussion.

*Some ActorCEO content features products and services that pay us if you buy at no additional cost to you.

This supports our ability to bring you top tier industry content.* 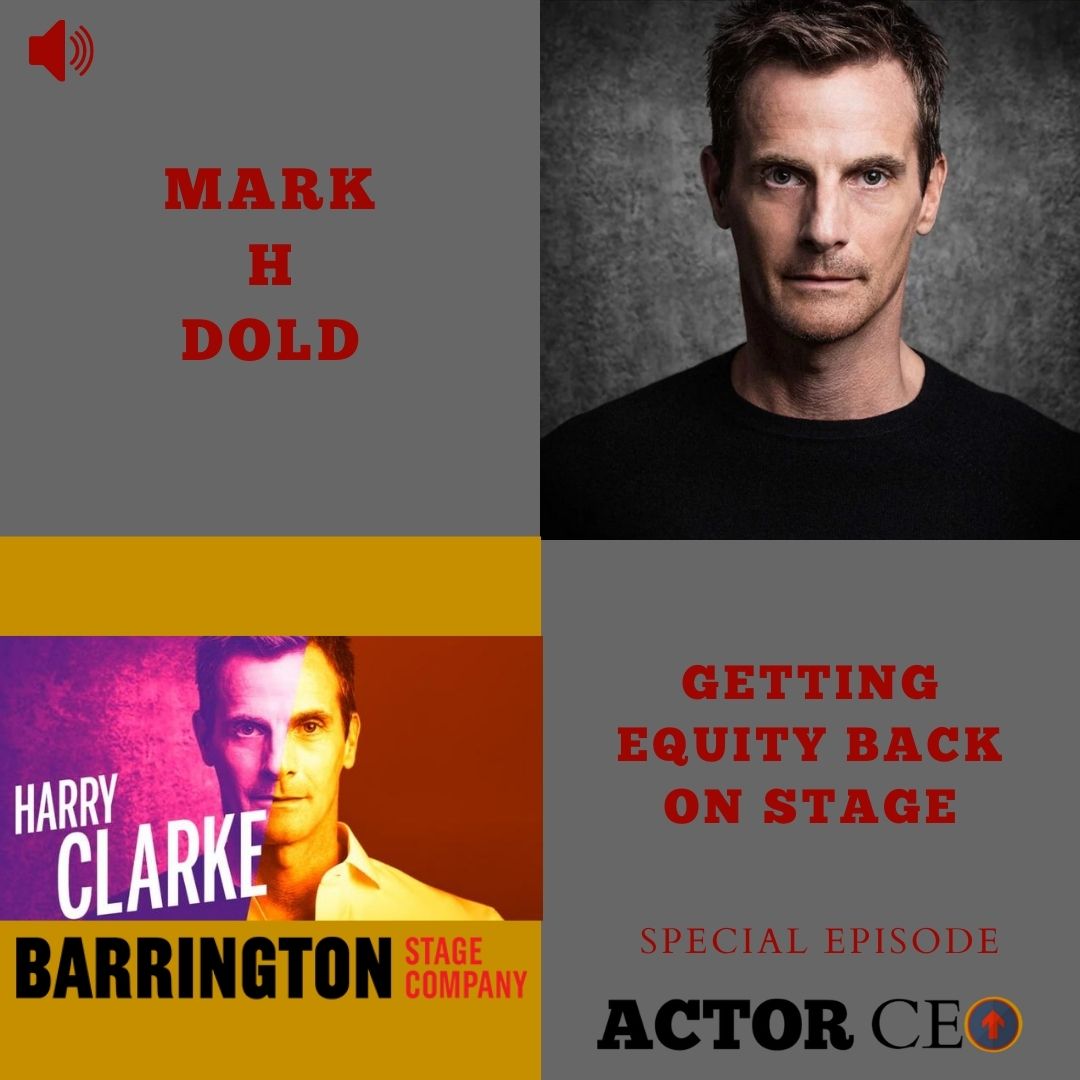 How did you feel when you found out you and your show would be a monumental first in this historical moment?

“So COVID hits in March, I’m in The Inheritance at the time, etc. And Julie [Julianne Boyd, Founder and Artistic Director of Barrington Stage Company]  and I are talking as friends and I hear about her struggles and I hear about all the shows getting pulled and everything getting canceled, you know, and that was happening, of course, not just in this country but around the world.

So when my phone then randomly rang, probably the middle of April, we were maybe three weeks, four weeks into it, I instantly suspected, and I don’t know why, that she was calling me to offer me something. I didn’t know what it was. Then she said to me, ‘Hey, I’ve got this idea for this solo show. And if we can get anything off the ground, it might be this. What do you think?’ And it was something that had been loosely in our conversation as collaborators since 2018. So we knew eventually we were going to do it. Hopefully we were going to do it. Nowhere in this discussion was, ‘Oh, and by the way, you’re going to be first,’ because nowhere in this discussion did we know that. We didn’t know what other theaters’ plans were. Other theaters were still kind of adapting, expanding, contracting, still trying to figure out what in the world can we do? What should we do, etc.

So when the phone call first came in, I didn’t know that I was going to be the first. Then as things started, you know, as the virus kept morphing, and things kept developing, and realizing Oh, this theater’s canceling this season, or this theaters canceling their season. Oh, they’re postponing ’till this, they’re postponing ’till that and all the other little dominoes started to fall. And we were kind of left then. It hit all of us, not just me, but Julie. Oh. Not only are we possibly the first in the Berkshires, in the region, in the state. Oh my goodness. We are the first Full Stop.”

Does it still feel strange?

“I don’t know. What is it? It’s not like a badge of honor. I don’t necessarily feel like, is it a gift? Is it a weird responsibility? I feel so much about it. I feel like you know, who knows about it? Who doesn’t? Are we suddenly under this microscope that we shouldn’t be under? Are there going to be haters? Is everyone going to support us? I don’t know.”

Every show is a team effort, but this one required innovation and cooperation from every single entity, including the Actors Equity Union. What was that like?

in”I had no idea when this phone call came with the offer with the potential of this job that we were going to be literally first, right? That all came later in for everybody’s trying to figure out everyone was trying to figure out, gosh, how do we do this? How do we literally do this? But what I love is that everybody kept trying. Because every everybody believed, you know, we’re gonna have to try to get this going. If these other industries are taking these baby steps, you know, two steps forward, one step behind, let’s do it too.

I actually had to have a conversation with equity myself. You know, it’s like getting called to the principal’s office, you get this email from your union saying, we’d like to talk to you.  And I finally ended up saying to them, you know, I think this is your golden ticket, the show. It’s one person alone on stage, which is a social distance experiment to begin with. it’s alone in a rehearsal hall. I’m alone in my housing. And quite frankly, I said to them, you’ve got the blessing of an actor me, who is so familiar with the territory, is so familiar with this theater, the backstage, the dressing rooms, the bathrooms, how to get from stage right to stage left, whatever. I know that all of the safety measures that are being put into place, I’m here to say to you, this is a great plan because I could, I can, walk this theater with my eyes closed. Now if it wasn’t that, if it was some other place where I hadn’t worked before, or an actor who had worked in the space before, I don’t know if we would be having this conversation or what what the end result would be. And it was in no way a threat. I don’t even know if it was a plea. But in that moment, I thought and I said to them, if you can’t green light this then you’re waiting for a vaccine.”

What is rehearsal like in the time of Coronavirus?

When I walk into the rehearsal, the building, I also have my own entrance, the stage manager and I we have our own entrance. So another one of these weird coincidences is there are three different ways into this building. One entrance has basically been designated as mine. I go up the stairs, and when I hit the second floor where all the rehearsal spaces are for Barrington, what is presented is there’s a table and this table is basically my sanitation station. There is a thermometer in one bowl, there is a pulse oximeter in another bowl and then there is a third bowl that is called dirty and then there are masks. There are rubber gloves if I feel like I need them. There is a bottle of hydrogen peroxide solution dissolved there and hand sanitizer and there is a spray bottle of isopropyl rubbing alcohol.

I am required daily to take my temperature, do my pulse oximeter and then I put them in the empty bowl. I clean them off and put them back. I then have to go to a Google document every day, put today’s date in, my name, let them know what Barrington stage building I am entering, I have to answer the question was your temperature below 100 degrees. Yes, no. Is your pulse oximeter reading above 90%? Yes, no. I hit send wait for a little green checkmark. And then when you get that checkmark then and only then can I then walk, I don’t know, four yards into the actual rehearsal studio. So you have to do all of that and wait for like the hypothetical Ding, ding ding, and then you walk into the room.

Now, I mentioned those four people. We are the only four people allowed in that rehearsal room. Nobody else. You can’t even stick your head in the door. There are other theater staff members who are allowed on the floor. But everyone, not only on that floor, but everyone in the building is masked from the second they walk in to the moment they leave. I too, when I leave my rehearsal space, even though I’ve checked in all those boxes, if I venture anywhere else in the building to pick up a package that has arrived, you’re checking my mail or ask a question about my paycheck or whatever, I too have to wear my mask.

I am not wearing my mask during that rehearsal of my production. However, everyone else who’s in the room, the stage manager, the director and the assistant director are, I’d say at least 12 feet away from me. And if they come up, if they any of them come up from behind their kind of desks, which we’re using as a barrier, mask on.

I have a script on my phone. I also have an old school script in a binder. And I keep it with me, I have my own kind of personal table, which is spaced way back in the room in the corner. And that is only my area. And nobody touches anything. I mean, it was so strange to start first day of rehearsal with the director who I’ve been working with for now 16 years and not hug her Hello.”

These procedures where Equity’s idea?

“All of that was stuff that had been negotiated with the union. A lot of it, I will say, were some ideas that were Barrington Stages’. The Union was like, ‘Oh, that’s a really great idea.’ And I also had this complicated rider that came with a contract, which I guess I’m the first person assigned to. It’s a Code Safety Rider, okay, that everyone had to sign, that said that if I got sick, the theater’s workman’s comp would take care of me, that they would take care of me through the duration of any illness, that they would pay for everything, that my housing would continue to be available to me, that I would not be evicted from housing, things about how clean my car had to be, things about how my housing has to be cleaned. It’s so thorough.”

All your self tape gear in one place. Lighting, audio, backdrops and more.

Do you think the procedures will stick even beyond the current crisis?

I’m just thrilled that it’s happening. Some of the baby steps we’re taking here, I mean, some of them are baby steps. Some of them are massive, and have been very expensive. Hopefully, we’re all going to know better. Listen, I know Julie’s learning something every day, like oh, yeah, let’s keep doing this. It’s a really good idea. And you know, what we should have done that years ago. I’m glad we did that now. And oh, it’s just it’s just better this way, isn’t it? Let’s keep this up.”

Mark, what do you how we as a theater and artistic community gain from the work you all are pioneering?

“Well I think we’re all going to learn how is truly essential art is and that it can in its magical way really be healing and it really goes back to community and to remind us how special coming together is.

And I will say to every actor out there, hopefully, if we can all get back to work, being reminded the joy of rehearsing. You know? You forget. And I mean, we all have waves of unemployment. Some waves are bigger than others, but sitting in this particular wave where you think oh my gosh, is this ever going to happen ever again, to get back into that kind of mud pit and start rolling around again – oh my gosh, it’s the most glorious feeling in the world and I can’t wait for all of my comrades to feel that again because there is nothing better.”